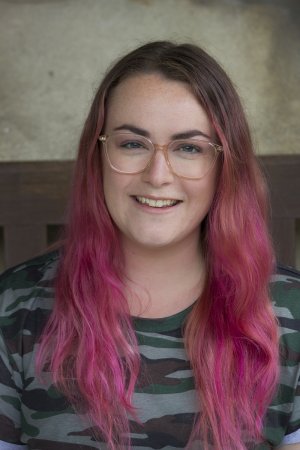 Angry Inch asking about her career and how she started as an Ambassador and then an intern at The Court Theatre.

Rachel: What is your current job at The Court Theatre?

Rachel: What was your first involvement with The Court Theatre?

Erica: Aside from being a regular audience member throughout my childhood, and being part of the Theatresports competitions, I was a Court Ambassador in my last year of high school.

Rachel: What school did you go to and when were you a Court Ambassador?

Erica: I went to Avonside Girls' High School, and was a Court Ambassador in 2010.

Rachel: What did it mean to you to be part of the Ambassador Programme?

Erica: It was such an awesome opportunity to see what goes on behind the scenes at the theatre, to see a show in it's rehearsal stages, and of course to see the shows for free! It also meant I could talk about and recommend shows to people, as well as having heaps to write about for NCEA Drama!

Rachel: What did you do after you left school?

Erica: I went to the University of Otago and studied for a Bachelor of Arts in Theatre and in Linguistics, including doing a year of this degree at the University of Virginia in the USA on a student exchange. I then went on to do Graduate Diploma in Event Management at CPIT (now Ara).

Rachel: Tell us about interning at The Court Theatre?

Erica: I had to do an internship for my Event Management diploma, and because of my background in theatre I asked The Court Theatre if I could do it with them. They said yes, and so I worked from May - November 2015 doing various jobs such as Schools Tour Liaison for Maui and the Sun, Assistant Stage Manager for The Cat in the Hat, and the 2015 Youth Crew Coordinator. I was also an assistant for the Court Foundation Donors Gala, the Meridian KidsCan Gala, and for the Education Department. During this time I was also paid to be the Assistant Stage Manager for Hamlet: The Video Game (the stage show). It was so much fun to be working in a theatre every day - I worked with so many awesome people and learnt so much about all different aspects of the theatre.

Rachel: How did you end up back at The Court after your internship?

Erica: After my internship was complete, I was offered paid work as the Assistant Stage Manager on the summer musical Mary Poppins, and following that as Stage Manager for The Dunstan Creek Seance. After that I got a job working full time at The Fortune Theatre in Dunedin as a Stage Manager, but when a full time Stage Management job was on offer at The Court at the start of 2018, I applied and was accepted!

Rachel: What do you love about being a Stage Manager?

Erica: I love being able to see a show through its whole process - right from the very first production meeting before rehearsals even start through to closing night. It's a cool feeling to know you've helped facilitate all the elements of the show to come together to make the final product. Plus you get to work with so many great and inspiring people, from designers to directors to actors and everyone in between!