Crash Bash has traditionally been interactive, but this year’s version of the show will use a mobile app to engage the entire audience, rather than just one or two people. For us it's a really exciting theatrical journey of how to engage 600 audience members at once, which is really challenging.

Using mobile learning app Kahoot!, the teenage audience will be encouraged to use their phones during the show, interacting with cast members live on-stage by answering questions and sharing their opinions on topics discussed. Schools will also be able to compete in the quiz components during the performance. 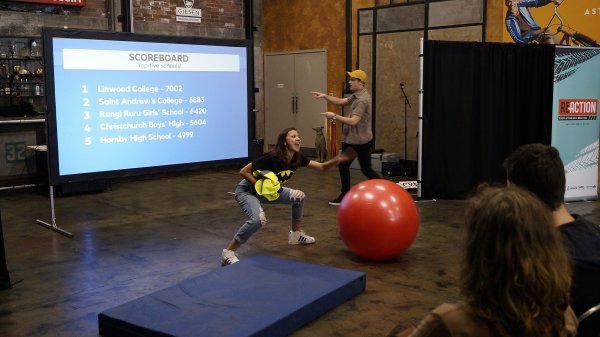 Despite the diversity of audiences, the problems facing young drivers behind the wheel is similar across the board. The key focus for Crash Bash: Reaction is distracted driving (whether that be because of phone use, passenger distraction or out-of-car objects such as digital signage), impaired driving (drugs, alcohol and fatigue) and the consequences of these. Educating people on the risks of distracted driving is a key goal for the council and police due to our rising annual road toll.  Our current death rate is 7.9 deaths per 100,000 people, whereas in Australia the rate is much lower, at 5.0 deaths. If we had a comparable death rate to Sweden (2.6 deaths per 100,000 people), approximately 250 fewer people would have died in 2017 – something the council, police and The Court Theatre are looking to address through Crash Bash: Reaction.

Relevance was a key goal for the project, with young people consulted during the development of Crash Bash: Reaction and feedback from previous years also informing the new direction for this year’s show.

Alongside the new and interactive production elements, AV Design will be used to showcase examples of bad driving decisions – and the consequences of these.